May has been cold and the wettest month since 1996, it's not been the best conditions and yet a number of us have been out and about and enjoying our fishing. The largest rainbow so far this year was caught at Winterborne Zelston at 10Ib 7oz.

Last Tuesday our volunteers cleared the margins around Sandys lake in preparation for stocking. This lake is at the moment maintaining its levels and will be a real bonus to the club once we can get access.

At this time of year the growth around Chapmans is increasingly evident and as we cut and strimmed the lake margin it was noticeable how much more hogweed there was. The Giant hogweed can be toxic.( The sap burns). Just in case of any confusion see below.

Can I extend a big thankyou to everyone who came, it was a great team effort. We were quite lucky with the weather as the rain arrived just as we were leaving.

In the afternoon, we restocked Chapmans which is now brim full of fighting fish! Unfortunately, because the track up to the top lakes was too waterlogged, we could not stock Sandys lake, hopefully next time!

Fishing Huts and signing in

As the restrictions are now easing sufficiently the club are pleased to allow members to start using the huts again. It will be a relief to many as a means of shelter and for those among us who are willing to tell stories about the one that got away!

From today could I ask everyone to sign in the visitor record located at Rawlsbury farm giving details of their car and how many persons are visiting.

We have a really good relationship with the owner of the bungalow closest to the lake and its important that this is maintained. Can I respectfully ask everyone not to fish too close to the bungalow and definitely not in front of her windows.  Signs indicating where not to fish will be put up in the near future.

These are gleaned from your catch return emails. I am happy to detail some of them as follows:-

• Initially I took a traditional approach with damsels, then a gold head hairs ear with no joy. Another angler suggested a black and red buzzer and straight in on the first cast. Then the wind dropped and nothing for a little over an hour. On reflection I think the first fish took the buzzer on the drop and I was fishing too deep, as the next came after I shortened up the leader.

•    Another hour and I saw another big fish, probably 10lb, but 50ft away and moving away. Popped the nymph in front of it but those shots rarely work and this didn’t. By 2pm ish I decided it was time for a blind cast into the area I thought the big fish were coming from and likely holed up in. Fourth cast and fish on and a good one. When I first saw it side on it was very very deep in the body. Big, though not as energetic as the 9lbers in January. I was very pleased to eventually get it in the net. 10lb 7oz and a new PB for me.

•    Yesterday evening I decided to go to Zelston trying to catch one of those double figure Rainbows. The conditions were somewhat not expected with a stronger wind and light conditions not favourable. I spent 3 hours walking around trying to locate a larger fish but the wind made spotting a larger one difficult. The fish appear to be taking more natural imitation and not lures. They often followed the lure (hot head damsel) but would turn at the last option. I turned back to a trusty Size 16 Pheasant Tail Nymph and managed to drop the nymph a foot in front of their nose, catching two fish weighing 6lb and 4lb 12oz.

•    Chapmans Rainbow 3:11oz           #12 Blakestones Buzzer. I saw some small rises and a few buzzers milling around mid lake on the lodge side of the rowing boat. Took longer to land than to entice to take.

Chapmans Rainbow 3:06oz           #14 Detached body foam Hawthorn fly. Down beyond the underwater island by the last jetty. Cast out mid lake and almost the instant it landed on the water it took the fly with a big swirl. Total effort less than 10 minutes ☹

There were lots of Hawthorne flies about plus some ultra marine deep blue small beetles. Not seen these before but they were very pretty and about 8mm in length.

Went to Viners and had three nice rainbows about 3lb each. Fish were clearly chasing either sedge pupa or damsel nymphs close to the surface. Too early for sedge pupa hence a lightweight marabou damsel with black eyes used. 3 foot pull then 30 seconds wait then repeated.

These are I think the best fighting fish I have ever caught at WDAC lakes. The only one better was the overwintered one at WZ in February last year – that was just big and very strong with a spade of a tail whereas these were very strong and very aerobatic. I used a 12ft 4x Orvis superstrong leader and a #6 rod. 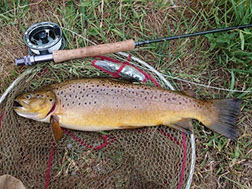 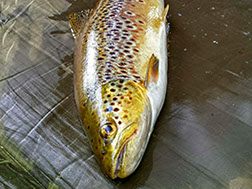